Read the Latest Digital Issue
To better serve our many subscribers that are working from home during this time, we are offering digital issues of North American Oil and Gas Pipelines. Please Subscribe to ensure delivery of future digital editions. Thank you and be well.
April 14, 2020 Cover Stories

Over the last decade, vacuum excavators have become an increasingly common piece of equipment on oil and gas pipeline jobsites. Primarily used to expose underground infrastructure, vac trucks use water or air to safely and efficiently remove dirt without causing costly damage to existing pipes or other facilities.

“During that boom, vacuum excavators were, and still are, an integral part of the oilfield industry, as oil tanks and pipelines were continuously installed to support the increased production of oil,” Bruhn says. “Companies employed vacuum excavation to safely install new pipelines without damaging the myriad of existing pipelines in the ground. Vacuum excavation first grew in acceptance and use across Canada, and the technology has expanded into the United States. Today, vacuum excavation is quickly expanding southward.”

Discovery Hydrovac uses a variety of different makes and models of vacuum excavators. The company selects the equipment for the job based on the amount and method of spoils disposal.

Bruhn adds that there are decades’ worth of underground piping and utilities that can’t be located using traditional methods. Vacuum excavation has allowed companies to safely install new pipelines without damaging these existing pipelines.

Exposing existing infrastructure represents the bulk of Discovery Hydrovac’s business, according to Stacia Smith, vice president of the Utah-based vacuum excavation service provider. The company’s business is about 80 percent related to oil and gas pipelines.

“We do everything from distribution lines to daily service lines,” Smith says. “We work a lot with PG&E, working in neighborhoods, exposing pipelines for repairs or maintenance. We also work on compressor stations, exposing those for repair or updates. We work on big pipeline crossings, and we help with environmental concerns, controlling mud or water on jobsites.”

Vacuum excavators are versatile machines, Bruhn adds. Some of the most common applications for vacuum excavators on pipeline maintenance work, Bruhn says, include exposing buried pipelines, hydro-testing new pipelines and process facilities, pressure testing, spill containment and clean-up and exposing the area around pipelines and flanges to allow maintenance or repair of underground infrastructure.

As vacuum excavation technology has evolved to serve the pipeline market, there are several factors that go into finding the right machine for the job.

“Vacuum excavation is still relatively early in its growth cycle,” Bruhn says. “Because of this, the industry continues to evolve rapidly. Vacuum excavators have gone from small trailer units, to very large and powerful units.”

Vacuum excavation customers tend be looking for a broader range of operating flows and pressures, vehicle sizes, axle capacities, boom reach and carrying capacities, Bruhn explains. Manufacturers like TRUVAC have been working on improving features and capabilities on its products, such as TRUVAC’s introduction of a ¾-opening rear door to simplify offloading and cleaning, as well as improving the range of motion on the boom for increased productivity.

“The current trend is smaller, yet powerful equipment with a focus on maximizing legal payload,” Bruhn says. “As vacuum excavation continues to grow in use, the awareness and focus on the equipment’s adherence to regulations also continues to grow with local departments of transportation and enforcement agencies.”

“Vacuum excavator manufacturers are now starting to look at ways to reduce the overall unit’s weight or to make better use of the allowable gross vehicle weight on the chassis,” he says. “As a result, manufacturers have used some out-of-the-box thinking to develop some interesting chassis configurations.”

“Sizing of equipment for pipeline work really depends on the project or anticipated pipeline work,” Bruhn says. “For example, large transmission pipeline work requires large capacities due to the remote location and larger excavations. For distribution, typically in urban areas, it’s important to understand weight regulations and size of working areas to properly size equipment. Weight regulations are a major factor when it comes to selecting equipment for urban areas.”

Smith adds that spoils are one of the biggest considerations when Discovery Hydrovac is pairing the right equipment for the job.

“We choose our equipment based on the amount of spoil and dumping needs,” she says. “Some projects require you to dump spoils into bins, and some vacuum trucks are not suited for that.”

While any piece of equipment requires regular maintenance, such as daily inspection of oils and lubricants, vacuum excavators have another area to pay attention to.

“Common areas for maintenance are anywhere debris travels in the system, such as the boom hose and vacuum filters,” Bruhn says. “Additional items for consideration are the water pump components, such as check valves.”

The decision of whether to rent or buy is an important factor for many companies to consider, Bruhn says. However, there is another option to consider.

“The market has changed significantly in terms of buying versus renting,” he says. “Today, a significant number of customers are looking to lease or rent their units, with purchase options at the end of the term. A customer may receive a contract award, which will keep the unit busy for a few months, but the future may still be uncertain.”

A rental with a purchase option allows the customer to get a vacuum excavator without a long-term commitment, Bruhn says. That way they can put the unit to work and determine if there’s enough workload to support the purchase. Many rental companies have developed creative leasing and renting options to provide customers with the best possible options to meet their needs.”

“Our fleet comprises trucks from the most well-respected dealers, that offer the kind of quality that allows to stay on site longer for make more efficient use of time,” she says. “We have a number of larger trucks that can dig and dig and dig and don’t have to leave constantly to dump their spoils.”

Discovery owns its own fleet, Smith says, but they will rent additional trucks in a pinch.

Bruhn agrees that finding qualified operators is key to maintaining safety and productivity on the jobsite.

“Vacuum excavation equipment operators must be proficient in the safe and proper use of the equipment, while also protecting vulnerable and expensive infrastructure,” he adds. “Training in the areas of proper setup, operation, evacuation techniques and load handling helps to ensure that the operator is familiar with the specific method of vacuum excavation so they can safely maximize their efficiency and productivity on the job.” 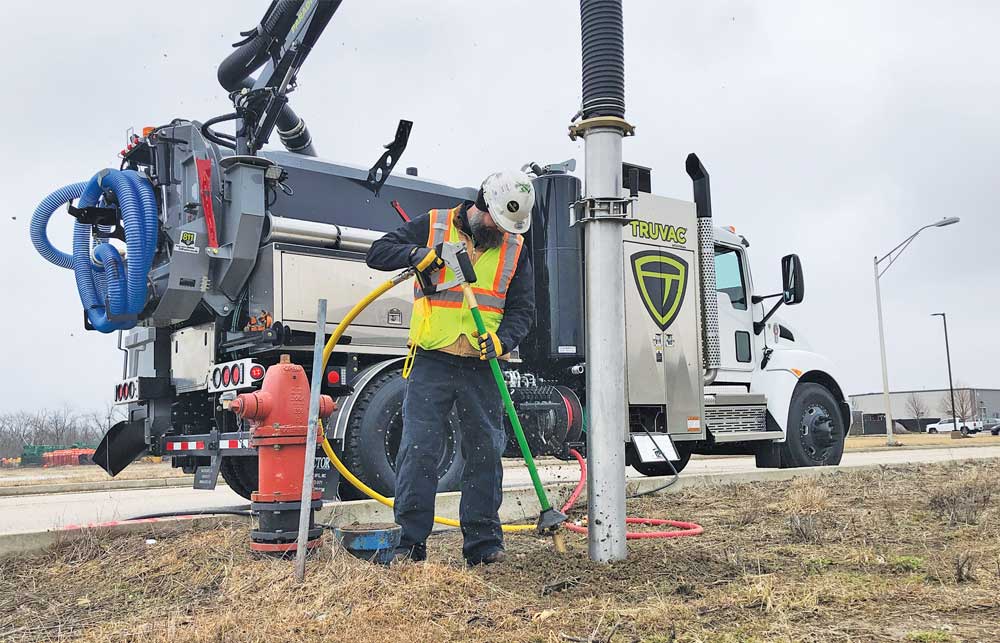 The current trend in vacuum excavators is for smaller but powerful equipment with a focus on maximizing legal payload. Different methods of cutting soil, such as water, air and a combination of both water and air are also being developed and improved.

Despite some recent slowdowns in the pipeline sector, there remains plenty of optimism for continued growth in the market for vacuum excavation.

“We see the biggest opportunity in the maintenance, updating and repairing of pipelines,” Smith says. “Our underground infrastructure is old and in danger of failing, and that drives a lot of our work now. I don’t see that stopping. When all the work from repairing pipelines built in the 1950s is done, then all the pipelines from the 1970s will need our attention. The work is ongoing. What we’re doing now will need to be updated in 20 to 30 years depending on the technology.”

This ongoing maintenance work is key to ensuring pipeline integrity management. Vacuum excavators — whether hydro or air — are a safer, more efficient means of exposing pipelines for integrity management work than hand digging, Smith says. While Discovery Hydrovac uses both hydro and air excavation, there are different considerations for each method.

“Typically, we use hydro excavation,” Smith explains. “The big difference between the two is that with hydro excavation, you’re cutting soil with water pressure. It’s faster and more efficient. With air, the big advantage is there are no wet spoils. However, certain soil types can be a challenge to work in.”

Smith explains that some projects require air excavation because of a preference — or requirement — for dry spoils.

“A lot of customers based in the East are asking for air excavation,” Smith says. “It’s harder on the truck, but in the East, there are a lot of places don’t take wet spoils.”

In some locations, wet spoils are considered hazardous material. A benefit of using air excavation is that the dirt can be replaced without having to wait for it to dry out.

“We see many opportunities due to aging underground infrastructure and issues with dig-ins,” Smith says. “We know that hydro-excavation has become the gold standard in the industry, and in most states, it’s required for exposing pipelines. That trend will continue to grow with communities insisting on safer excavation. Sadly, it only comes to light when there is an incident. The use of vacuum excavators has spread to many states and is required in most. I hope we don’t have to have accidents and people hurt to realize the importance of safe digging.”

Bruhn agrees that work to maintain or replace aging pipelines will continue to drive the market.

“At TRUVAC, we see continued growth in the replacement of old distribution pipelines,” Bruhn says. “Vacuum excavators are used in this application for locating and other jobs, but the continued popularity of non-destructive excavation will also continue to drive further growth in this field.”