Read the Latest Digital Issue
To better serve our many subscribers that are working from home during this time, we are offering digital issues of North American Oil and Gas Pipelines. Please Subscribe to ensure delivery of future digital editions. Thank you and be well.
March 6, 2019 Featured Stories

In 1956 the Federal-Aid Highway Act authorized the creation of 41,000 miles of interstate highways and paved the way for 41,000 miles of seeding operations across the country. In Pennsylvania, Penn Line Service Inc. responded to the call. More than 60 years later, the company has one of the largest fleets of hydroseed applicators in the region.

Based in Scottdale, Pennsylvania, Penn Line serves uniquely different markets in critical infrastructure maintenance for electric utilities and independent energy producers, highway-related construction and inside power distribution/teledata for commercial and industrial environments. Their operation covers eight states and extends from the Mid- and South-Atlantic regions to the Great Lakes. In a typical year they’ll work on hundreds of different projects varying in size from a small township project to several hundred acres across a new pipeline route.

Staying on top of a competitive market across a swath of states requires getting an edge through any means possible, including their equipment. Though they were accustomed to their fleet, Penn Line was offered a demonstration of the Apex XA4000 applicator. Soon after, they purchased their first of four Apex model XA4000s. 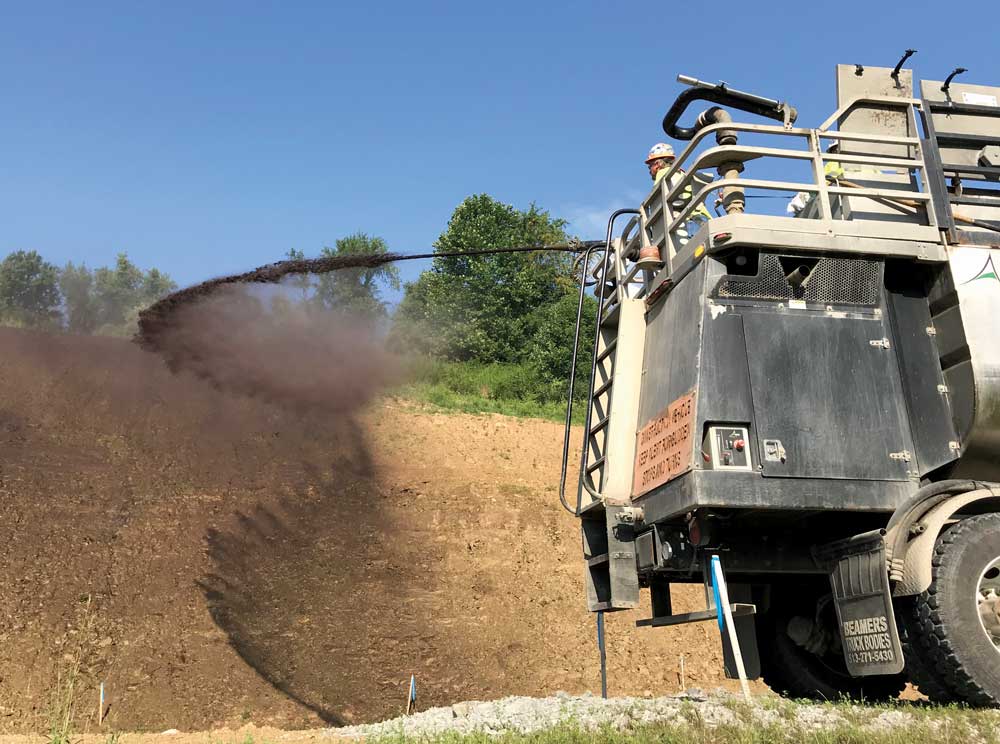 Penn Line was asked by Columbia Gas to hydroseed a pipeline through the Monongahela National Forest that was 26 miles long and consisted of approximately 400 acres. The WB Xpress was a highly scrutinized project since almost half of the project went through national forest land, and the project was home to some of the roughest terrain Penn Line had ever encountered.

Cracking the Key to Productivity

Recently, the Shell Cracker Plant in Beaver County, Pennsylvania, put Penn Line’s new fleet to the test. A cracker plant “cracks” ethane molecules into petrochemical building blocks that can be refined to create polyethylene, a plastic used for various purposes, from food packaging to automotive parts. The site encompassed approximately 350 acres and required millions of cubic yards of excavation.

The majority of this project was hydroseeded with a product called Earthguard Fiber Matrix, which is specifically designed to protect against erosion on slopes and is to be applied at a higher application rate than standard wood fiber hydromulch.

In the past, Penn Line used a 3,000-gallon hydroseed applicator from a competing manufacturer.

It would normally take two hydroseed loads to cover one acre of Earthguard with the 3,000-gallon units. When they started using the 4,000-gallon Apex hydroseed applicators, they found that the production increased significantly.

“Even though you’re only gaining 1,000 gallons of capacity, the augers and pump have the capability to handle a thicker slurry which in turn gives us the ability to load more material into each load,” Penn Line project manager Collin Hill said.

The Apex units also have a larger hydraulic system which increases the power of the augers significantly.

With more powerful augers, Penn Line can mix more material per tank load, making a thicker slurry and increase the amount of ground they can cover. As an added benefit, the powerful pump allows Hill and his team to cover more ground from the tower: Apex hydroseed applicators can shoot up to 250 ft from the tower.

The vortex pump combined with minimizing twists and turns in the suction pipe allowed for discharge of the entire tank of material without clogging, ensuring steady flow over long distances, greater efficiency and consistent, high-quality results.

Whereas it used to take them two loads to cover one acre, it now only takes one load to cover the same area. This not only increases production, but can also be a real time saver depending on how far water is from the project.

“In this industry any time you can increase production, it gives you an upper hand on your competition,” Hill said. 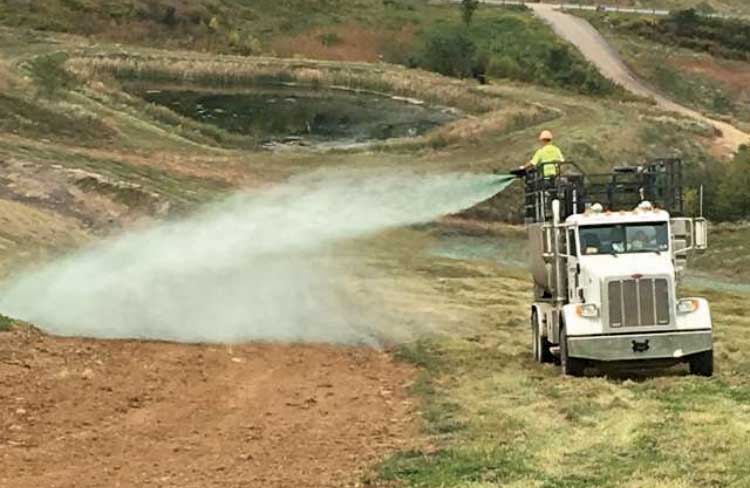 A Pipeline to Productivity

Increased productivity is one thing, but one recent project wouldn’t have been possible without the use of the Apex hydroseed applicators.

Penn Line was asked by Columbia Gas to hydroseed a pipeline through the Monongahela National Forest that was 26 miles long and consisted of approximately 400 acres. The WB Xpress was a highly scrutinized project since almost half of the project went through national forest land, and the project was home to some of the roughest terrain Penn Line had ever encountered.

Penn Line used two high-end hydroseeding products from Profile Products, based in Buffalo Grove, Illinois. The first was Flexterra, a slope stabilization flexible growth medium to protect the ground from erosion. The second was ProGanics Biotic Soil Media, which was applied under the Flexterra to help add organic matter back into poor soils. The ProGanics and Flexterra were applied between 3,500 to 5,000 lbs/acre.

Considering the high application rates of both of these products, the increased capacity of the Apex hydroseed applicator was invaluable in this situation. Several weather-related delays added to the pressure and shortened the timeframe for when the project had to be completed.

“Due to the shortened timeframe, I don’t think this job would have been completed on time without the extra capacity of the Apex,” Hill added.

For Penn Line, the extra capacity of the Apex hydroseed applicators coupled with the vortex pump ensures steady, strong application further than ever before with less trips for refilling. Whether covering a highway or pipeline, less refill time means more time spraying and getting the job done.

John Imm is director of sales for Apex, a hydroseeder manufacturer based in Lebanon, Ohio.