Read the Latest Digital Issue
To better serve our many subscribers that are working from home during this time, we are offering digital issues of North American Oil and Gas Pipelines. Please Subscribe to ensure delivery of future digital editions. Thank you and be well.
December 4, 2018 Cover Stories, Featured Stories

Tracy Townsend didn’t take the most direct route to the pipeline and utility industry. She has spent the last 17 years at Washington Gas, the 170-year-old local distribution company that serves Washington, D.C., Maryland and Virginia. Once upon a time, though, she thought about becoming an attorney.

Instead, Townsend found herself in the underground construction realm, pioneering a strategic alliance program between a local distribution company and a contractor. Her efforts showed it was both possible and practical to lower costs while installing capital assets.

Through collaboration and communication Townsend negotiated a partnering between Washington Gas and NPL Construction Co. that has had a lasting, positive impact on the two companies, serving as an example for the industry at large, says Mark Bridgers, principal at Continuum Capital.

“Tracy Townsend led one of the most impactful industry transformations on behalf of Washington Gas in 2001-2003 with the development and implementation of a ‘Strategic Alliance’ that yielded unprecedented improvement in productivity, safety performance and quality compliance,” Bridgers says. “Still in place today, this relationship has met the test of time.”

Townsend’s ability to collaborate, communicate and lead in the development and implementation of the strategic alliance program at Washington Gas is why she is the 2018 Pipeline Leadership Award recipient.

“The collaboration and integration efforts undertaken by Washington Gas and NPL were and remain unprecedented,” Bridgers says. “The work to move from a traditional arm’s-length relationship between a contractor and LDC to then embrace both collaboration and integration were transformative and served as an example to multiple other LDCs who later adopted this type of business relationship. I know of no other LDC and contractor business alliance that yielded higher performance improvement in cost, safety, quality and customer satisfaction while standing the test of time over its current 17-year timeline.”

Townsend accepted the award at the Pipeline Leadership Conference, Nov. 7-8, at the Hyatt Place Houston in The Woodlands, Texas.

“I am deeply honored to accept this award,” she said at the award reception on Nov. 7. “This has truly been a team effort. I am lucky to be in this industry full of sponsors and mentors. All you have to do is ask, and they will give you their knowledge freely. I am happy to accept this on behalf of Washington Gas.” 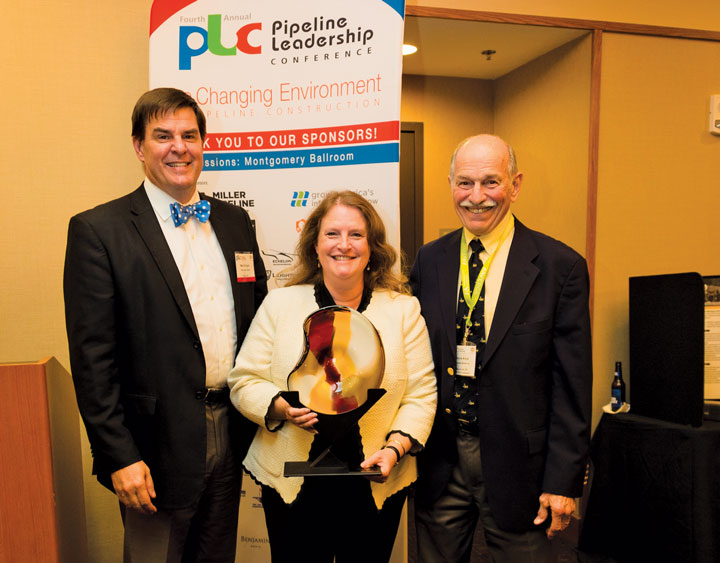 Townsend grew up as “a military brat” and never envisioned herself in this industry. When she finished undergrad at Virginia Tech in the late 1980s, earning a bachelor’s in business, she contemplated law school. An adult friend convinced her otherwise and hired Townsend at a small financial and business management firm, where she was involved with such diverse projects as building a golf course and a chain of high-end hair salons. Townsend also found herself working with an underground contractor that had been working with Washington Gas for 20 years.

“I knew nothing about construction,” she admits. “The type of person I am, I like to get out and understand the business. I would go out on jobs and work on crews. When they saw me coming, they’d call me the ‘Inquisitor’ because of all the questions I asked.”

A few years later, after gaining more experience at a professional services firm and then starting her own consulting firm, Townsend answered a job ad to be a “strategic alliance manager” for Washington Gas in 2001. The job posting was external-only, which was a bit unusual for the utility company.

“I didn’t know what strategic alliances were, so I went to Borders and bought two books on the subject,” she admits. “When I read them, I thought, this is exactly how I approach business.”

Townsend got an interview with Washington Gas. It was unlike any other interview process she had ever experienced. “It was like Thanksgiving dinner, and I was the turkey that everyone was gathered around.”

Within a year, Townsend had implemented the strategic alliance between Washington Gas and NPL. She was promoted to division head in 2007, assuming responsibility over replacement construction, marketing and business development, construction and operations support, dispatch, field services and field operations.

Townsend continued to climb the ladder at Washington Gas, beginning a rotational assignment in 2010 and assuming responsibility for the company’s focus on worker and pipeline safety, including its Distribution Integrity Management Program (DIMP) and compliance programs, namely pipeline compliance, damage prevention, corrosion control and leak survey.

During that same time, Townsend has served as the Washington Gas witness in legislative and regulatory proceedings in Washington, D.C., Maryland and Virginia, regarding the company’s accelerated pipe replacement plans. Townsend was promoted to her current position as vice president of construction, compliance and safety in 2014.

One of the people who was at that Thanksgiving dinner style interview was Terry McCallister, the former chairman and CEO of Washington Gas who retired July 2018.

“It wasn’t easy. Everyone Tracy worked with thought that a contractor was just a contractor. She had the people skills to get them to understand what we trying to achieve,” McCallister says. “That speaks to her ability to work with people.”

McCallister describes Townsend as dependable and someone that others want on their team.

“I have a lot of respect for what Tracy does,” he says. “She sets goal and gets it done. You’ll say, Tracy we need to take that hill, and Tracy takes that hill.”

Townsend’s strengths as a communicator and collaborator are what McCallister says make her such a strong leader.

“Getting people to understand what the plan is and what the goal is and figuring out how to get there. It takes a whole bunch of people to make it happen, and she gets people on board and gets them to truly function as a team,” he says. “She’s open and works really well with a team.”

Townsend credits McCallister for the strategic alliance concept. The idea was to collaborate to improve quality and lower costs while accomplishing capital improvement work for Washington Gas.

“It’s a virtual organization, with partners on both sides establishing a set of goals, a business plan and outline how the work is to be done,” Townsend says. “The overarching goal is to be the premier contracting relationship in the energy industry.”

“I was basically a department of one,” she says. “I had no direct authority and no contractual signing authority with construction partners. It was all done through influence. In 2002, about a year after I was hired, we had the whole structure in place.”

Through the alliance, Townsend says Washington Gas and NPL have been able to align their resources around a specific goal to ensure safety, quality and cost effectiveness.

“We’re better together,” she says. “Rather than negotiate back and forth, we’re looking for a scenario where one plus one equals three. We want the partnering to be at least win-neutral, not a win-lose scenario.”

“Tracy is passionate about pipeline safety,” Chapman says. “She is an advocate as a distribution company in managing infrastructure. In seeing the big picture, Tracy understands how to evolve a pipeline system to best serve customers well into future. It’s because of her passion that she has come to understand the physics of a pipeline, even though she is not an engineer, and she would be the first to tell you that, but she thinks about the physics of a pipeline like an engineer. Tracy approaches the work we do with a high degree of knowledge, and she brings a level of transparency to get others to be supportive of our efforts.”

As a mentor, Townsend has fostered a strong group of peers and subordinates to help her get the work done.

“Tracy has built a team she works with who would do anything for her to achieve success for the company,” Chapman says. “She has a core group of peers she interacts with on a daily basis, and she prioritizes that. It allows her to be engaged, and she demands others be engaged so that they come to the right conclusions. The team she has built, even when she’s not there, the team mirrors her dedication every step of way.”

Townsend believes that leaders come in two general types, by position or by influence. That is, some people are put in a position of leadership by their job title and others are leaders by their actions.

“I happen to be one by position, but more importantly I hope to be a leader by influence,” she says. “It’s important to have the trust of the people working with and for you. You have to care about the individuals, not just the work.”

Being a good leader and building a strong team, Townsend says, requires a person to be somewhat courageous, to be an advocate for others and to stay true to oneself.

“I know I can’t do this all myself,” she says. “I need a team. Because of my position, I could force them to be on my team, but I’m guessing I wouldn’t get their best quality work. It’s about people wanting to be on your team.” 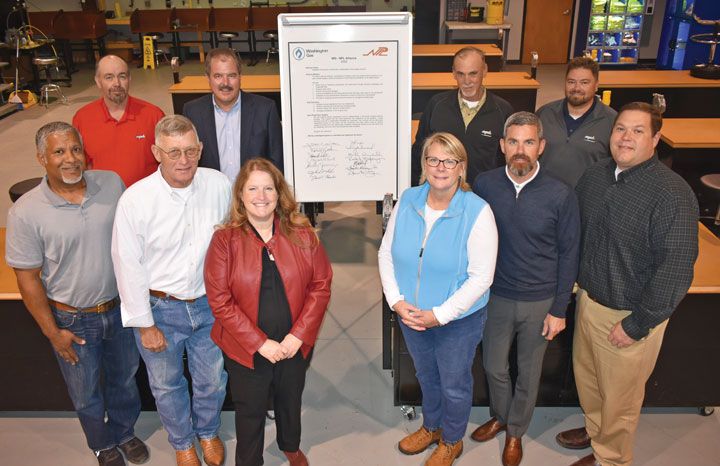 Tracy Townsend (front, red jacket) stands with her strategic alliance team. The Washington Gas and NPL Construction Co. partnership has been going strong for 16 years and continues to serve as an example for the oil and gas pipeline and utility industry.

Outside of her career, Townsend has learned important lessons through playing soccer. She has played the sport since grade school and continues to play in an adult league.

“The biggest thing I have learned playing soccer is the idea of a team success,” she says. “I was playing goalie one time in high school, and we lost a game. I was really down and out, and I remember I walked into my dad’s office with big tears in my eyes. It was a military office, and they were kind of sweeping up the dirt I left behind. My dad said, ‘Let’s see, how many players are on your team? It seems to me there were 10 other people who didn’t get it right either.’ A team is better together. Sometimes you’re not your best, and you have to hope that the people on your team are at their best.”

In the construction contracting industry, Townsend says she learned everything she knows from the folks doing the work. When it came to Washington Gas, she learned the processes from the ground up too.

“There’s always a subject matter expert,” she says. “Even if they’re not a leader in job title, they’re a leader in their experience. I’ve had a bunch of mentors, even some I learned I don’t want to be like them at all.”

At Washington Gas, Townsend credited Chapman, McCallister and her current boss Doug Staebler as having provided strong mentorship throughout her career.

“One of the things that attracted me to this industry is the passion about doing the work and the willingness to share,” Townsend says. “All I had to do was make them know I was interested in learning from them.”
However, the one person who stands atop Townsend’s list of mentors is her father.

“It might sound kind of cheesy, but my dad is my hero,” she says. “He’s retired military, and the men and women he commanded still stay in touch with him about their life events, whether it’s a career choice, a child graduating or getting married. I hope to be just a little bit like him.”