Read the Latest Digital Issue
To better serve our many subscribers that are working from home during this time, we are offering digital issues of North American Oil and Gas Pipelines. Please Subscribe to ensure delivery of future digital editions. Thank you and be well.
February 12, 2019 News

The Pipeline Leadership Conference had its most successful year yet in 2018. The fourth annual event attracted a record of 166 attendees to the Hyatt Place Houston/The Woodlands, Nov. 7-8.

The two-day conference focused on “The Changing Environment of Pipeline Construction” and featured a mix of speakers and panel discussions. The agenda was divided into two section: The Executive Forum on Nov. 7 highlighted industry trends and management concerns, whereas the Workforce Forum on Nov. 8 took aim at attracting and retaining younger professionals to the oil and gas pipeline industry.

As part of the Workforce Forum, 23 students from Oklahoma State University, Skills USA, Houston Community College, Louisiana Tech, Arizona State University and the University of Alberta participated in the inaugural Student-Led Pipeline Innovations Workshop. These college and high school students are aspiring to enter the oil and gas pipeline sector. As part of the agenda, they presented school projects and their experiences to the attendees. 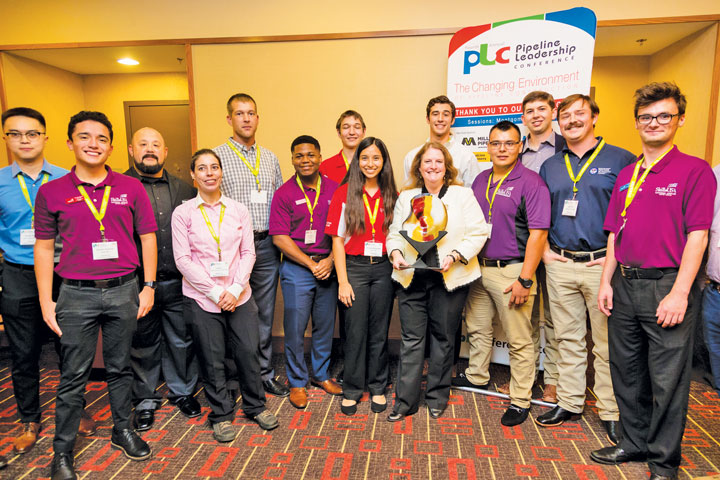 Participants of the Student-Led Pipeline Innovations Workshop pose with Townsend.

The students also had the opportunity to directly interact with conference speakers and attendees as attendees of the full conference, having been sponsored by Centuri Construc-tion Group, the Distribution Contractors Association and Vacuworx. These sponsoring organizations also served as mentors to these young leaders in preparation for the workshop.

One of the major highlights of the agenda was the Executive Roundtable, featuring Brandon Anderson, senior vice president, commercial, U.S. natural gas pipelines, at TransCanada; Todd Denton, president of Phillips 66 Pipeline LLC; Patrick Lamb, president of the Pipeliners Association of Houston; and Tracy Townsend, vice president of construction, compliance and safety at Washington Gas. The panel discussion was moderated by Mark Bridgers, principal at Continuum Capital, and covered a wide variety of topics related to the safe construction and operation of oil and gas pipeline assets in North America.

The first day of the Pipeline Leadership Conference was capped off with the presentation of the Pipeline Leadership Award to Townsend, for her role in developing a strategic partnership program at Washington Gas. You can read about Townsend’s story in the November/December 2018 issue of North American
Oil & Gas Pipelines, or by visiting napipelines.com/passion-pipelines-tracy-townsend-pipeline-leadership-award. 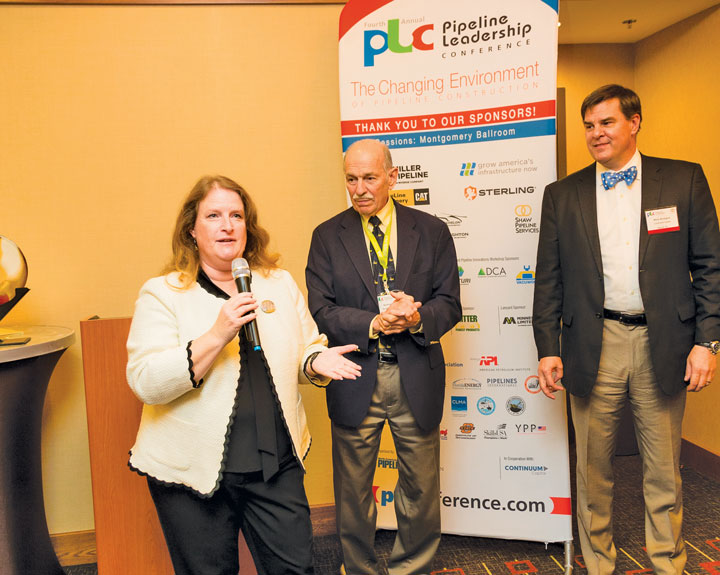 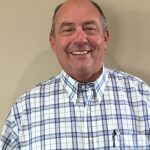 The Pipeline Leadership Conference also recognized long-time industry veteran Don W. Thorn with the inaugural lifetime achievement award during the reception. Thorn was an active member of the conference program committee since its inception and helped shape the agenda. Thorn died unexpectedly on Aug. 3, 2018, at age 69. Accepting the award on behalf of the Don’s wife Judy Thorn and the Thorn family was Melissa Wise, a long-time family friend and wife of Ronnie Wise, who worked with Don at the Pipe Line Contractors Association (PLCA). 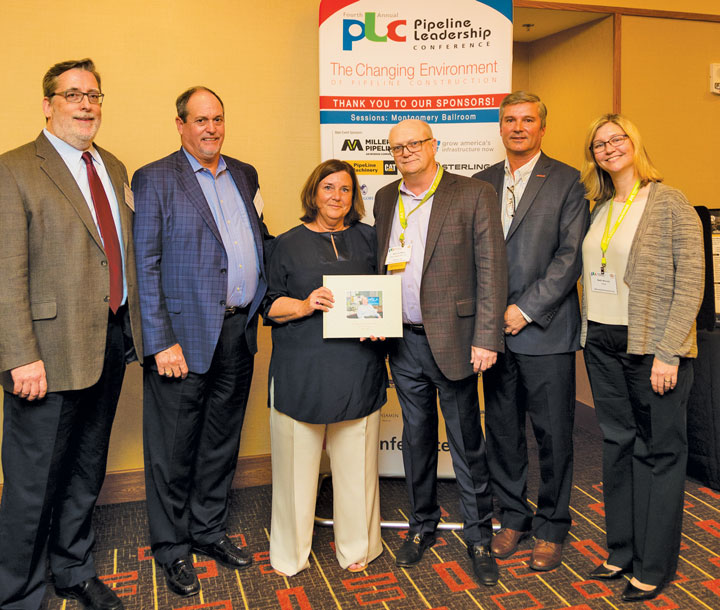 A special guest joined the Pipeline Leadership Conference during the Four Craft Unions & Tribal Nations panel, which included Lou Thompson and Bobby Gonzalez of Tribal Energy Resource, David Barnett of the United Association, David LaBorde of the Teamsters and Robert Wilds of the International Union of Operating Engineers. (Shawne Owens of the Laborers International Union of North America was scheduled to appear, but was unable to attend at the last minute.)

The Honorable James E. Campos, director of the Office of Economic Impact and Diversity at the U.S. Department of Energy, concluded the panel by explaining how his office looks at the pipeline industry by helping to enact legislation that considers the impact on minority populations and minority businesses. He was especially interested in the Four Craft Unions & Tribal Nations panel because of the potential partnerships between major pipeline companies and Native American populations across the United States. 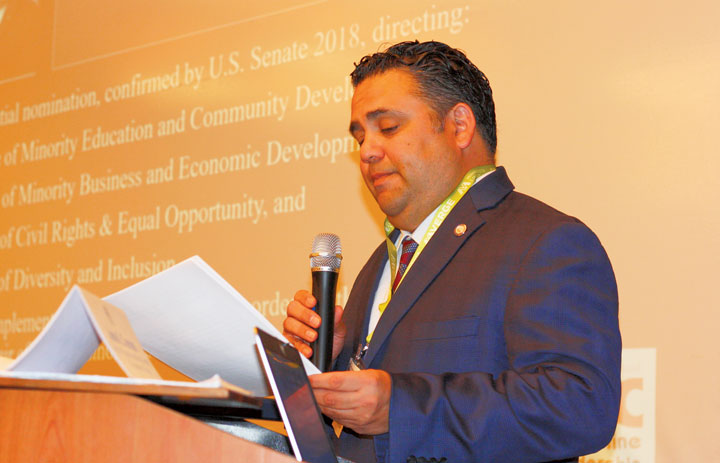 The Honorable James E. Campos, director of the U.S. Department of Energy Office of Economic Impact and Diversity, was a special guest during the conference. He spoke during the Four Craft Unions & Tribal Nations panel and shared some of the projects that his office has undertaken in the energy sector. 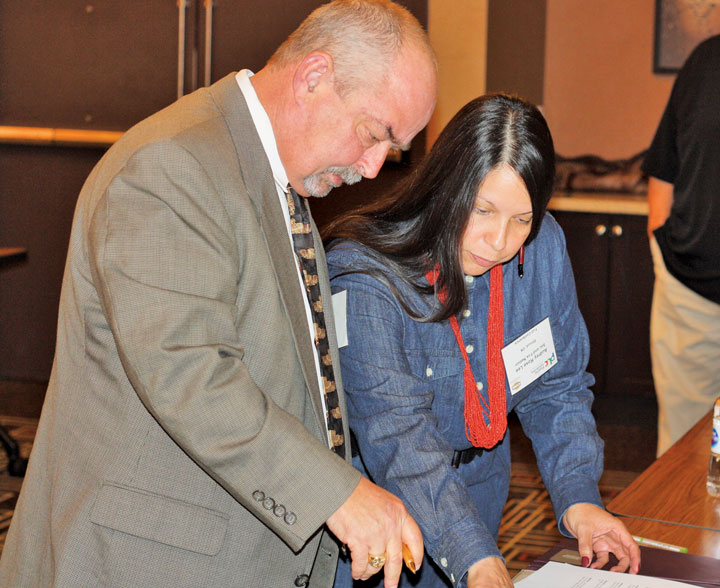 A panel that drew considerable discussion was the Perspectives from the Next Generation of Pipeline Professionals, with Young Pipeline Professionals (YPP) organization leaders Kaushal Shah of Mott MacDonald and Sheri Baucom of RCP Inc. and YPP veteran mentors Amber Rabo of Cheniere Energy and Jerry Rau of RCP. The YPP representatives discussed some of the challenges they have faced in their careers and gave advice for industry veterans and the student participants on how to navigate relationships, communication and advancement in the pipeline industry. The presentation sparked a lengthy question and answer period with the audience, and several people came up to speak to the panelists afterward to further the discussion of inter-generational relations in the workplace. 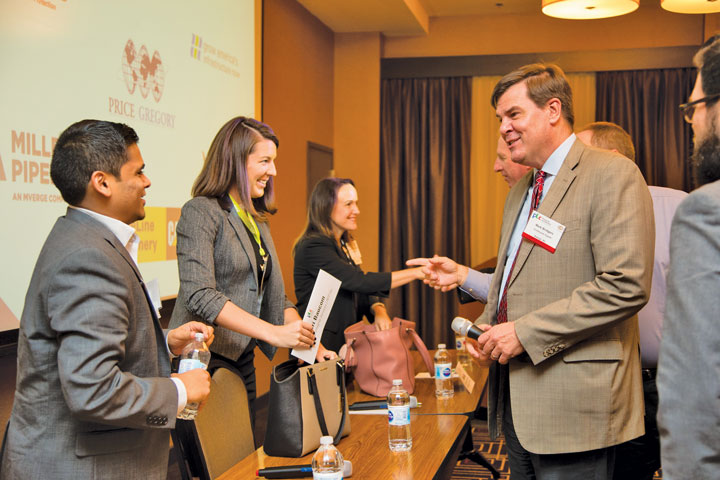 Representatives of the Young Pipeline Professionals Kaushal Shah and Sheri Baucom, with mentor Amber Rabo and Bridgers, during the Perspectives from the Next Generation of Pipeline professionals panel.

Other notable presentations included a panel discussion on Pipeline Safety Management Systems with Charles Dolezal of CenterPoint Energy and Diana Goff of Enbridge Gas Transmission, moderated by David Murk of the American Petroleum Institute (API); a panel discussion on Prudency and Effective Communications in Pipeline & Distribution System Construction Programs, with Lindsay Sander of Sander Resources and Ivan Crespo of Pathfinder LLC, moderated by Bridgers; a presentation on Project Management Lifecycle with Dave Klimas of EN Engineering LLC and Mike O’Shea of Xcel Energy; a presentation on The Road to Success, regarding the IPLOCA publication, by Kevin Parker of Mears Group; and a panel discussion on Training Qualifications, Benchmarks and Risk Management panel with Jody Mitchell of MOSAIC and David Schramm of EN Engineering, moderated by Kramer.

The Pipeline Leadership Conference has launched a call for abstracts for the fifth annual event on Nov. 6-7, 2019, at Hyatt Regency Houston Intercontinental Airport in Houston, Texas. Abstract submissions should be sent via the conference website, plconference.com/call-abstracts. Deadline for submission is Friday, March 29.

The Fifth Annual Pipelines Leadership Conference is designed to recognize companies and individuals driving transformation and innovation in pipeline and distribution system design, construction and operations through people, process and practice. The presentations at this two-day event are focused on innovative and hands-on leadership approaches that achieve revolutionary improvements in performance in the areas of new development, system replacement, ensuring safety, improving efficiency and overcoming challenges from inside and outside the industry.

The Pipeline Leadership Conference Program Committee will review and select topics for the event. The committee is comprised of long-time oil and gas pipeline industry veterans, representing operators, contractors, engineers and trade associations.

If you have questions regarding the Pipeline Leadership Conference call for abstracts, contact Brad Kramer, managing editor of North American Oil & Gas Pipelines, at bkramer@benjaminmedia.com or call (330) 467-7588. Visit plconference.com for updates and additional information.