Read the Latest Digital Issue
To better serve our many subscribers that are working from home during this time, we are offering digital issues of North American Oil and Gas Pipelines. Please Subscribe to ensure delivery of future digital editions. Thank you and be well.
October 2, 2018 Featured Stories

Mark Marshall is a welding engineer at Energy Transfer Partners, one of the country’s largest energy companies, and he’s seen it all throughout his tenure. Natural gas is responsible for fulfilling nearly a third of U.S. power needs and heating half of all U.S. homes. To accomplish this, a network of nearly 3 million miles of pipe has to be maintained through repairs, expansions and upgrades. To put it simply; it’s a never-ending process. Those in the industry are constantly looking for better and faster ways to get the job done, and Marshall is no different. However, he also doesn’t want to sacrifice safety, time or profit.

Enter plasma arc cutting, which replaces oxyacetylene cutting and carbon arc gouging. Energy Transfer Partners is one of the many companies that have switched to plasma, and Marshall is pleased with the change.

“It’s an excellent process. It doesn’t matter if you’re cutting or gouging. There’s no soot, very little mill scale,” he says. “You can cut pipe through the coating with no problem whatsoever, and it doesn’t disturb the coating or mechanical properties of the pipe.”

He also says it is a safer process. “It’s a very clean process compared to oxy, and not to mention with oxy you have a potential for back injuries from lifting the bottles and stuff. You don’t have that problem with plasma,” he explained, and added that back injuries have already declined.

These are just two of the many reasons several major contractors for Energy Transfer Partners now use plasma arc cutting. Among the most recognizable names are: Associated Pipeline, MPG, U.S. Pipe and Wilbros. 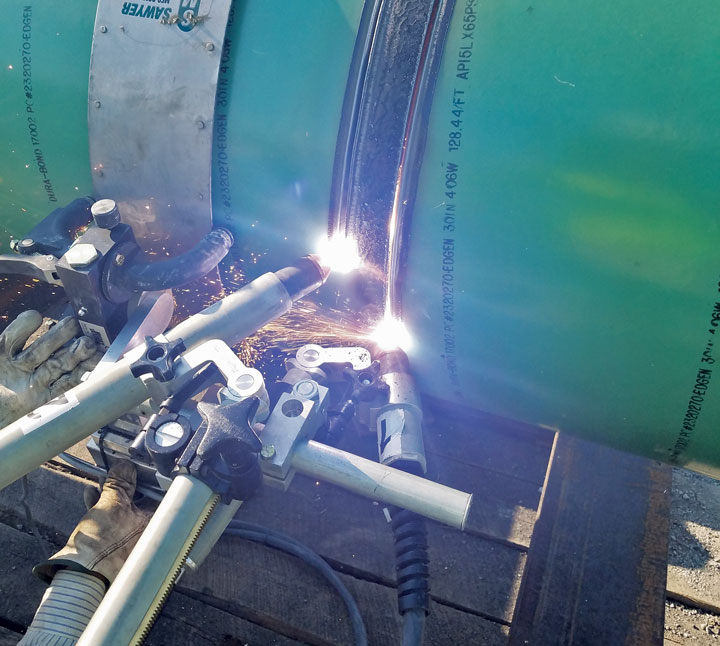 James Wingo, a welding boss for Wilbros, says plasma provides substantial savings with regard to time and cost. In a direct comparison, he said plasma can cut in one day what used to take people three days with oxy-acetylene cutting. “No one in the industry ever dreamed this was possible,” he says.

To better explain, Wingo discussed a recent job involving two lines, one with six miles of 24-in. 375 wall pipe and the other with seven miles of 30-in. 406 wall pipe. Wingo used two plasma torches mounted on a Mathey Dearman pipe cutter to bevel 57 pups in just over six hours. While one torch beveled, the other back beveled. He insists the number of cuts would have easily taken three times as long using oxyacetylene.
The work was made even easier by Wingo’s selection of two Freedom 38 PPA units from Hypertherm. The units are self-contained, combining a 38-kilowatt generator and air compressor, and include a 125-amp Powermax125 plasma cutting system. The unit is small enough to fit on the back of a welding rig, trailer or a crawler carrier. This makes it easy for pipeline crews to move the unit quickly and efficiently.

The Powermax125 can pierce 1-in. thick material and cut 1.5-in. thick materials at a speed of 18 inches per minute. The availability of several torch options gives the crew further versatility, to either cut by hand or use a machine torch like Wingo.

This type of speed and versatility plays an important role in keeping pipeline work efficient. On the line, crews have found that using plasma cutting for tie-ins can be completed in 7.5 minutes. With oxyfuel, the same job takes nearly 20 minutes longer — assuming everything goes smoothly, there are no delays in preheating, and the oxygen doesn’t run out.

Oxyfuel is a process that uses a fuel gas and oxygen to burn through metal. Though reliable, it has several drawbacks. One of the largest drawbacks is how slow it is.

Part of the reason for the delay is the required preheating, which is when an operator has to heat up the pipe and burn back the coating before cutting. Another reason is the cutting process itself, which combines fuel, gas and oxygen. The oxygen is held in containers, which are heavy, pressurized and hazardous. As a result, only one or two containers can be transported at a time. When the oxygen inevitably runs out, welders must go back to the main staging yards for more.

Pipeline crews must wait through both of these processes, and may end up stalled anywhere from thirty minutes to more than an hour. As one worker explained, “A pipeline is like an assembly line. One slowdown affects everyone on the line.” With the help of plasma cutting, such stalls are becoming increasingly rare. 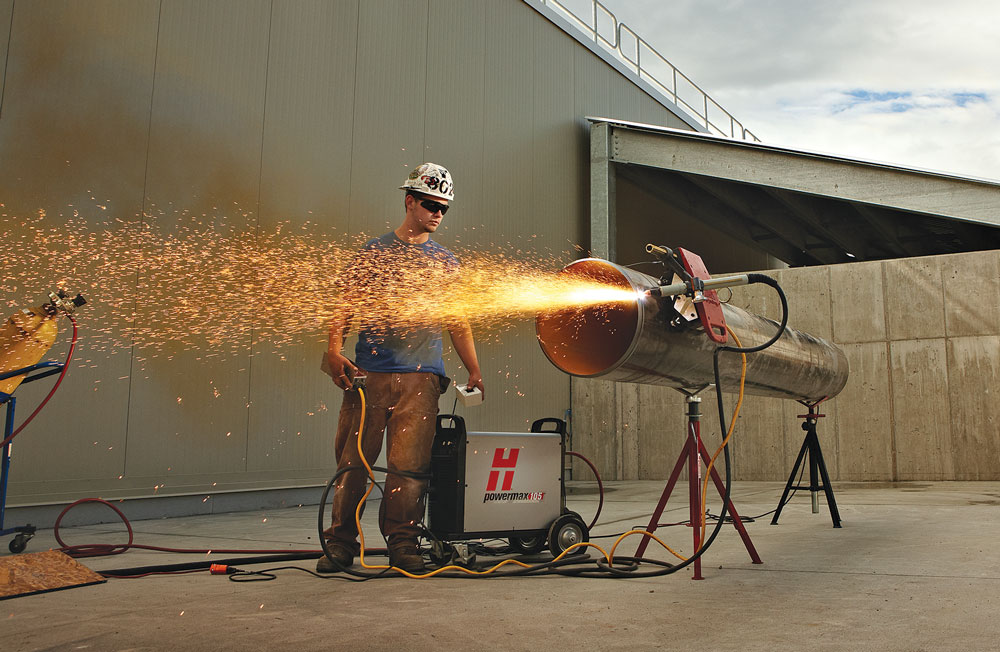 Pipeline and gas companies are increasingly embracing plasma for repair and rehabilitation work.

Pipeline contractors are also using the plasma to cut pipe to size and gouge out welds that need repair. Wingo says he used his Freedom units to cut pad eyes, making it a great investment. Before, three different processes — oxyfuel, air carbon arc gouging and grinding — were needed to do the same work.

Weld repair is often considered the toughest job. When a weld doesn’t pass inspection because of a defect found during radiographic or ultrasonic testing, a welder has to remove the old weld and replace it with a new and stronger weld. During this process, there is a risk of burning a hole in the pipe. If this happens, the pipe is unusable and has to be replaced completely.

Before, welders were using carbon arc gouging for repairs. An electric arc at the end of a carbon rod melts the metal, while a continuous blast of compressed air blows the excess metal away. Because of the brightness of the arc and the powerful nature of the air, which often pushed the metal towards a welder rather than away, workers had a difficult time seeing the pipe clearly. In addition to this, air carbon arc gouging can produce flames up to 15 ft away from the source — further, if it’s windy. This endangered the pipeline’s structural integrity and the safety of the crew.

However, with the new plasma units, workers can carefully gouge out the old weld. Metal is pushed away more easily, less metal vaporizes, and there are fewer sparks. As a result, the welder has better visibility and control.

While the speed of the cuts is important, the quality of those cuts is also essential to good pipework. The cuts have to be formed with just the right amount of bevel so a welder can come in and properly join the pipe to the line. The Powermax plasma found on the Freedom unit is created to do just that, ensuring accurate and smooth cuts that eliminate secondary work.

It’s easy to understand why pipeline and gas companies are increasingly embracing plasma for repair and rehab work. The safety features, ease of use, cutting speed, and cut quality in addition to a reduction of heat input by half, make plasma an exciting option for companies that not only value quality work, but the welfare of their employees too.