Read the Latest Digital Issue
To better serve our many subscribers that are working from home during this time, we are offering digital issues of North American Oil and Gas Pipelines. Please Subscribe to ensure delivery of future digital editions. Thank you and be well.
February 25, 2020 Featured Stories

The science of project planning has something of a tenuous reputation. How often do large oil and gas pipeline projects really come in according to plan? Almost never. Even during this era of digital transformation, project schedule and cost overruns are still the norm, not the exception.

Arguably, the reason for this is less about poor execution and more about how we still struggle to accurately forecast how long these complex capital expenditure (CAPEX) projects will actually take to complete.

According to the “Global Oil and Gas Pipelines Industry Outlook to 2023,” released in December 2019 by the data analytics firm GlobalData, a total of 148 planned and announced pipelines are expected to start operations in North America by 2023, with a combined length totaling more than 42,000 km. North America, along with Asia, is expected to drive new-build pipeline additions, contributing around 55 percent of those planned and announced, according to the report.

With all this additional capacity being built, there is a fresh opportunity to engage new methodologies to optimize the path of construction. New approaches using digital planning and risk assessment tools are poised to change oil and gas pipeline project economics forever, bringing with them the potential to deliver successful and on-time CAPEX projects while unlocking significant value.

For the first time in the oil and gas industry, project planning can combine artificial intelligence (AI) and human intelligence to create true risk intelligence. In a nutshell, this is achieved by bringing together historical project data and human expertise. This way, planners and project teams can produce more accurate and fully risk-adjusted schedules for their projects.

If oil and gas companies in North America can use these tools to adapt their scheduling practices to meet the needs of their unique regional environment, the productivity improvements could deliver up to 30 percent in cost savings. 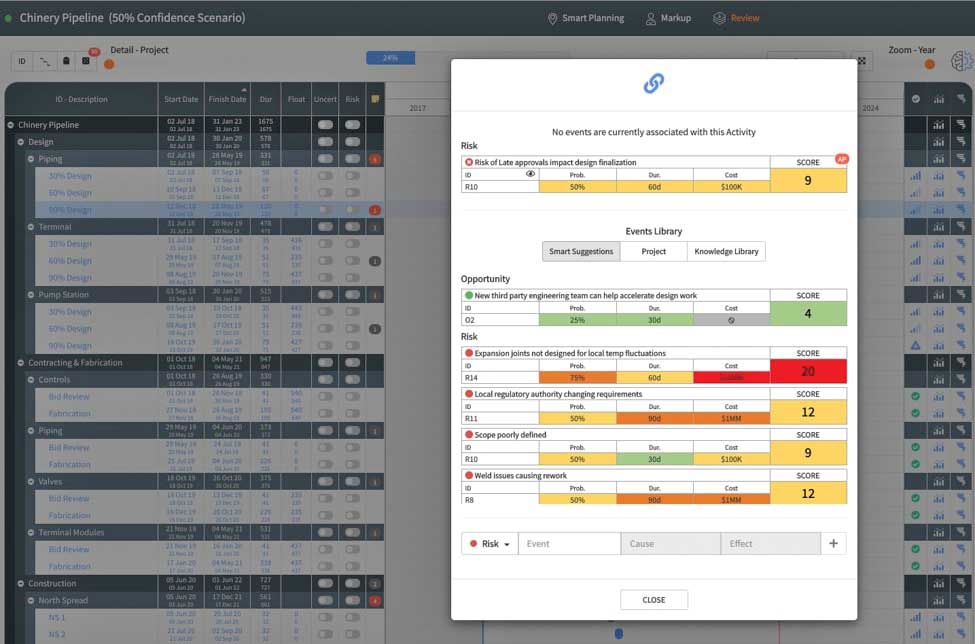 To improve forecasting capabilities, and ultimately project certainty, we need to do a better job of defining how long work really takes. This can be inherently challenging when building a construction schedule, as the scope of work, quantities and specific deliverables are often not 100 percent defined when the plan is being developed.

In recent years, initiatives such as cost/schedule risk workshops have helped drive realism into CAPEX forecasts. These measures have typically been reactive (simply applying contingency to a forecast) rather than actually establishing a more achievable and realistic forecast up front as part of the planning process itself.

With the advent of technologies such as artificial intelligence and the simple realization that it takes the expertise of a specialized team to build a plan, rather than a single planner working in a silo, the tide is finally turning toward more accurate risk analysis and project forecasting.

In the past decade, risk analysis, specifically in the form of Monte Carlo simulation has become widely accepted as a means of moving from “best-case” planning to “most-likely.” In simple terms, the Monte Carlo analysis simulates a very high number of potential project outcomes accounting for the huge number of possible variations in activity durations. The mathematics behind Monte Carlo is simple and defendable. What has been an ongoing challenge, though, is how best to capture and model the inputs needed for a Monte Carlo simulation.

In each simulation iteration, a given duration is selected from a range of values and applied to the critical path method schedule. This range is typically defined using what is known as a three-point estimate comprising a minimum, most-likely and maximum value. Again, while this is mathematically sound, getting a team member or discipline lead to define such a range in the form of say a three-point triangular or two-point uniform distribution quickly leads to you being marched out of the room under a cloud of ridicule!
To date, the problem hasn’t been in the mathematical modeling – instead it has been due to software vendors not making the risk and uncertainty capturing process more meaningful to the project team.

To help address the challenge of developing a meaningful risk model, a more team-centric and collaborative means of capturing risk and uncertainty inputs has been developed, along with more easily consumable and actionable risk reports. Enter the human intelligence element, where a team’s collective expertise is pooled together on a single platform.

Let the Software Compile the Uncertainty Ranges for You

Rather than force team members down the “describe the range of outcomes as a distribution” approach, why not capture such expert opinion through a simple scorecard instead? Simply ask team members to either buy in or push back on the proposed durations.

This approach carries the massive benefit of making the expert-opinion and knowledge-capture process very fast and easy for contributors, while still retaining the underlying modeling methodology. This approach also ensures that the total consensus of the team is accounted for in the risk model rather than being “the voice of one.”

Relating back to the challenge of owner/EPC contractor alignment, this concept of consensus-based planning helps drive that necessary synergy tremendously, which in turn drives buy-in and, ultimately, the project’s chances of on-time completion.

Use AI to Help Establish Your Risk Register

In addition to more efficiently capturing duration ranges through the approach described above, the second step in the risk model building process is to capture and quantify risk events.

Traditionally, risk events have been tracked in what is known as a project risk register. The modelling challenge arises when linking those identified risks from the risk register into the schedule risk model. Without overstating, this process is treacherous at best, and one that causes huge challenges in project risk workshops.

So instead of identifying risks in isolation of the schedule and then trying to embed them back in, why not provide an environment where risks are identified and scored directly in context of the schedule itself?

Taking this a step further, by leveraging AI, team members can also take advantage of the computer making suggestions as to common risks and their historical impact on similar scopes
of work.

Rather than team members having to brainstorm from a blank sheet of paper, they can take into account previously realized risks and opportunities from similar historical projects. As new risks are identified, they can be automatically added to the enterprise risk register, ready for subsequent consumption. This self-perpetuating risk management loop is an entirely new and more effective way for an oil and gas company to adopt a more mature outlook on risk.

Risk-Adjusted Forecasting Is Applicable to All Project Stakeholders

Historically, project risk analysis has been available to larger project organizations and, typically, embraced more by business owners than EPC contractors. The advent of next-generation, risk-adjusted forecasting software is opening up the benefits of risk insight to the broader market. By combining the data mining power of AI and pooled human intelligence, risk modeling is making huge strides forward.

Contractor organizations can now benefit from determining applicable contingency, along with appropriate margins, when developing their commercial bids. In short, contractors can ensure they are more competitive by following this risk-adjusted forecasting approach. Likewise, owners now get more insight into the realism and achievability of contractor schedules and, thus, can react and remediate faster.

In all instances, the benefit of providing an easier means of capturing risk inputs, applying them to a proven approach, and then gaining deeper and more meaningful insight through next-generation risk reporting is hard to argue against.

The long-overdue collaboration between human and artificial intelligence is finally becoming a reality. By enabling on-time project completion, this culmination of proven practices is the perfect union, with the potential to unlock value across a project’s life cycle. The end result is that more projects will see the light of day.