Read the Latest Digital Issue
To better serve our many subscribers that are working from home during this time, we are offering digital issues of North American Oil and Gas Pipelines. Please Subscribe to ensure delivery of future digital editions. Thank you and be well.
February 12, 2019 Featured Stories

Vacuum excavation is a growing — and in some cases a mandated — methodology for digging near underground utilities, at compressor stations or refineries. One of the companies doing its fair share of the work in the Southeast United States is Delta Daylighting.

Operating out of Houston, the company works in the Texas Gulf Coast region but has worked on several projects out of the state as it builds its reputation for reliable and efficient services.

Opening its doors in 2013, the company, like many in the vacuum excavation industry, works as a subcontractor for larger pipeline and oil and gas contractors. In Delta Daylighting’s case that includes Sunland Construction, Strike, Tucker Midstream, Primoris and Troy Construction, to name a few. Projects include work for customers including Kinder Morgan, Marathon, Shell, Williams and Enterprise.

“In the last two years we have worked in 10 to 12 states,” says Jesse Pletts, president of Delta Daylighting. “A lot of what we do is project driven. While we are based in Houston, and our customers are based here, when they mobilize to a job for a pipeline spread in the middle of Georgia, because of the reputation we have built for reliable service and reliable trucks, our customers then bring us to those regions where they mobilize.”

In the last year, Delta Daylighting crews spent about nine months in Tennessee working on a Kinder Morgan station project, in Missouri and Oklahoma working on Marathon’s Ozark Pipeline project, and they traveled to Georgia, Alabama, Mississippi, and North and South Carolina on various Williams Transco Pipeline projects.

Operating the trucks in the field is a crew of 20 full-time employees and an additional 30 temporary hires when the workload hits its peak. It is in this realm that Pletts sees the biggest issue emerging for the industry — a lack of skilled workers.

Because hydro-excavators are driven to project sites on a daily basis, the driver/operator must have a CDL Class B license, and there is a shortage of those workers nationwide. “Nationwide, we are seeing fewer and fewer people want to drive and then on top of that there are less who want to drive the truck and do the work,” Pletts says. “It can be a challenge to find, locate, screen, recruit and retain talent that wants to do this work.”

According to Jesse Pletts, Delta Daylighting president, the CV Series hydro-excavators are ideally suited to work in ground formations present in the Southeast United States.

A Variety of Work

Delta Daylighting’s crews complete an assortment of projects that test the possibilities of what a vacuum excavator can do, including potholing and line locating to creating 5x5x10 boxes and massive trenches. To help keep pace with this busy schedule, Delta Daylighting relies on an in-house fleet of eight Kaiser Premier CV Series hydro-excavators, though the company typically adds another six rental units during the peak summer months.

Pletts, who joined the company in 2016, says that when he started, they were running equipment from another manufacturer, but it could not meet the demands of the work Delta Daylighting was performing. It slowly transitioned to the current fleet, which as of 2018 is solely sourced from Kaiser-Premier.

“If you are digging in the ground near underground utilities of any sort that you do not want to damage, our CV Series trucks can go head-to-head against any other company, crew or vehicle and come out ahead. That is a function of both the CV’s capabilities, as well as the team that we have at Delta Daylighting,” Pletts says. “We have a saying, ‘We don’t want today’s job. We want tomorrow’s job and next month’s job.’ The best way to get that is not to drag our feet and take two days to do a one-day pothole.”

One of the keys to this in the region where his crews work, is the use of a hydro-excavator versus a suction excavator (air only or combination), which Pletts notes some people are using as a way to save water and be able to dump the spoils more easily.

“When you are working from Texas east and the Mason-Dixon line south, the ground composition tends to be a hard and thick red clay the deeper that you go,” Pletts says. “An air truck can’t break through that and get you the production needed to not only satisfy the customer, but also in a way that separates you from the competition.”

He adds that the CV Series, with its Robuschi vacuum blower system and the high-pressure waterjet technology allows his crews to easily cut through the dirt in a safe, timely and productive manner. All three of which have become hallmarks of a Delta Daylighting project. Based on his conservative estimates, the crews haul about 20 cubic yards of material a day. That number increases if there is a water source nearby and the ability to dump debris on site. 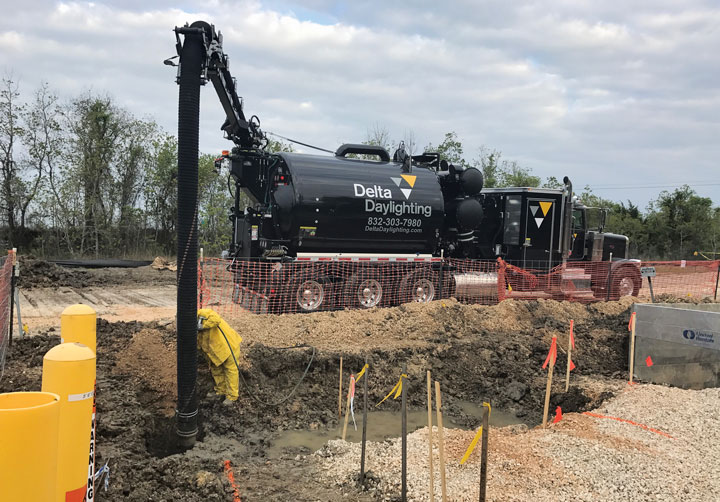 “Most of our work is primarily pipeline construction projects, pipeline facility work and refineries, and these big hydro-excavators do the job well for us,” Pletts says. “The tech specs of the CV Series make it one of the biggest and baddest hydro-excavation trucks on the market. And now with it on a Peterbilt chassis, it’s been a great marriage of technology and capability.”

These are important things when working in an industry that is growing and still fairly fragmented. According to Pletts, there are many small owner-operators running one or two trucks, a large chunk of mid-size companies like Delta Daylighting and a handful of large companies. Looking ahead, Pletts sees more companies entering the industry, but also a consolidation of some of these regional players too. Running the CV Series has helped Delta Daylighting enhance its reputation for timely, accurate and safe vacuum excavation services.

“The industry is starting to undergo some changes that are the result of the oil and gas pipeline operators becoming stricter on their mechanical excavation requirements,” he says. “There is more regulation being imposed on projects to ensure safety and that reduces the number of line strikes. As that comes down, there is more need and a desire for vacuum excavation on projects. Today, companies are including vacuum excavation in project budgets.”

Mike Kezdi is associated editor of North American Oil & Gas Pipelines. He can be reached at mkezdi@benjaminmedia.com.